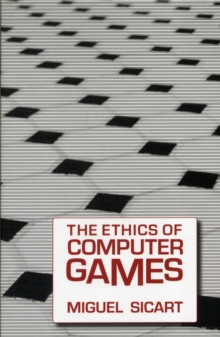 The ethics of computer games

Part of the The MIT Press series

Considerations of the morality of computer games seldom go beyond intermittent portrayals of them in the mass media as training devices for teenage serial killers.

In this first scholarly exploration of the subject, Miguel Sicart addresses broader issues about the ethics of games, the ethics of playing the games, and the ethical responsibilities of game designers.

Players should not be considered passive amoral creatures; they reflect, relate, and create with ethical minds.

The games they play are ethical systems, with rules that create gameworlds with values at play.

Drawing on concepts from philosophy and game studies, Sicart proposes a framework for analyzing the ethics of computer games as both designed objects and player experiences.

He explores issues raised by unethical content in computer games and its possible effect on players and offers a synthesis of design theory and ethics that could be used as both analytical tool and inspiration in the creation of ethical gameplay.